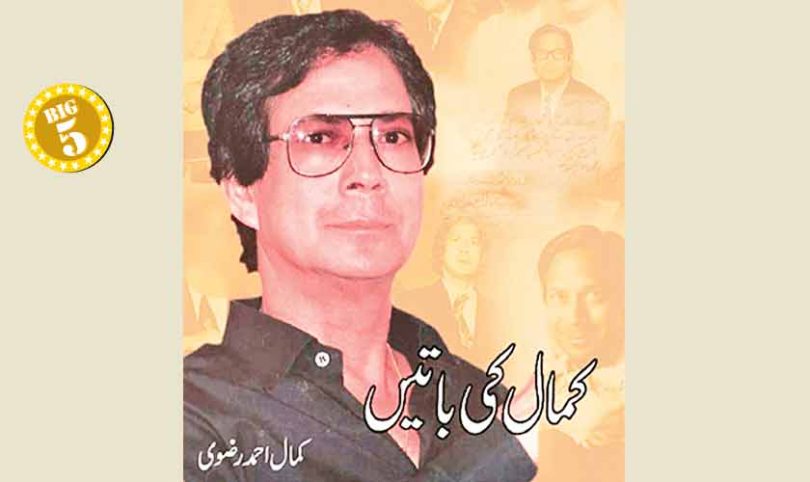 Pakistan’s entertainment industry has a rich history; people who were around in the 60s remember it for its golden era. The millennials, however, don’t have the urge or access to resources in the odd case that they may want to visit the past. They therefore have no clue as to what made Pakistani cinema, theatre, and especially TV as big as it is today.

As a guide to the good old days, we urge those interested to read these five books for insight to how the industry evolved. Happy reading!

The name Kamal Ahmed Rizvi instantly reminds you of Alif Noon but there was much more to the playwright and actor who played Allan than meets the eye. His autobiography Kamal ki Baatein – published posthumously one year after his death in 2016 – reveals unseen sides of his personality that were mostly hidden from the world. Not only is the book as entertaining as his best works, but it also gives you an insight into the effortless way he could make people laugh. After going through this book, readers will realize how vibrant and lively the art, literature and theatre scene once was and why it changed in the 1980s.

This book is not just an autobiography but also has pen sketches of some of Kamal Ahmed Rizvi’s peers and colleagues, including renowned poet Faiz Ahmed Faiz, famous painter Shakir Ali (from whose house he once stole a painting), as well as Saadat Hasan Manto and Shaukat Hussain Rizvi amongst others. He also takes readers down memory lane and describes his early days, his struggle, his success and his political affiliations. The book is fun to read but at the same time is a bittersweet reflection of the situation of our entertainment industry.

Balraj Sahni was Bollywood’s top character actor at a time when it was ruled by Dilip Kumar, Raj Kapoor and Dev Anand during the 1950s and the 1960s. He was born in Rawalpindi before Partition and stayed there till he was made to cross the border in 1947. In his book, Mera Pakistani Safarnama, the veteran actor writes about his trip back to his hometown, which was now ‘in another country’. Not only does he revisit his birthplace like a guest, but he also describes the changes that took place during his escape as a refugee and his return fifteen years later.

Originally written in English, the book was translated and made available in Pakistan recently, and is a wonderful read. The way Balraj Sahni describes his visit, his interactions with Pakistan’s film industry, and the way he was received by who he termed ‘his own people’ leaves you both happy and misty-eyed. This wasn’t his first book or his last, but it was certainly his best because it unites people of the two countries, more like his final film role in Garam Hawa that was released after his death in 1974.

TV actress Dr. Huma Mir’s biography of living legend Talat Hussain is exactly the kind of tribute we need for most of our actors and actresses. She explores parts of his career that we are familiar with, but she also brings forward the many details that aren’t known to many. If you didn’t know that Talat Hussain was the first Pakistani actor who studied at the prestigious London Academy of Music and Dramatic Art or worked in both Pakistani and Indian films (one Indian film to be exact) during his career, this book is a must-read for you. It covers the illustrious career of the legendary actor who has stayed relevant since the 1960s.

Want to know all there is to know about the Pakistani film industry? There is no book better than Ali Sufyan Afaqi’s series known as Filmi Alif Laila that is not only available in three volumes but covers the first fifty years of Pakistani cinema in detail. Ali Sufyan Afaqi was around when things were going good for Pakistani cinema, and he also witnessed and documented its gradual decline. Over the years he befriended every filmilegend there is, and it is his interaction with them that makes this book all the more interesting!

Last but not least is the second edition of Mushtaq Gazdar’s Pakistani Cinema, which was released recently without many changes to the original book. Like Ali Sufyan Afaqi’s books, this guide to Pakistani Cinema covers the first five decades of filmdom in Pakistan and is accompanied by a complete list of films that have been released in Pakistan. From Pakistan’s first film Teri Yaad in 1948 to Shoaib Mansoor’s Verna nearly 70 years later, the list is nothing short of a treasure trove for those who are in love with Pakistani cinema. The first section of the book, which has been reproduced from the first edition, is also worth reading, for it tells the story of Pakistani actors, actresses, and those who helped them become stars.