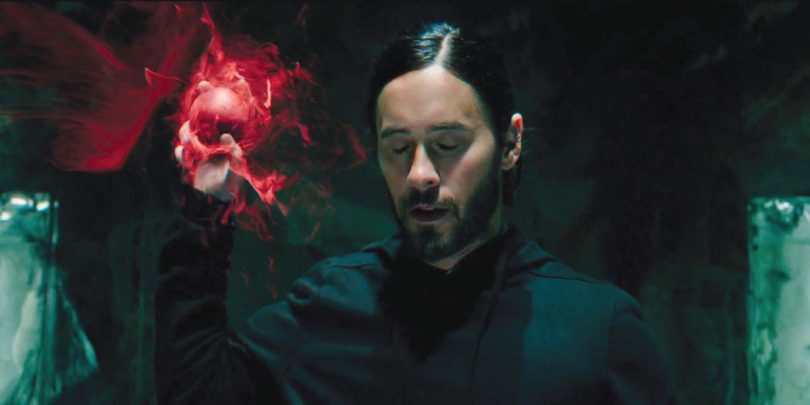 Shoulder: Morbius is so hopeless, clueless, and pointless that it makes the worst Marvel flick look better in comparison!

Think of the worst Marvel flick you have ever seen, be it in the cinema or at home. Carefully analyze all the aspects of that film and then visit the theatre for Morbius. Trust me, by the time you exit the cinema (during or after the film, depending on your tolerance level), you would have revised your list, placing Morbius as the worst film to come from Marvel.

What makes Morbius so bad that no one seems to like it? It follows the pattern of those Marvel flicks that came out before Blade, the first-ever Marvel flick to actually have a box office record worth mentioning. Pre-Blade, films based on Marvel Comics characters were extremely low-budget, idiotic, and ill-executed that they made even the bad films from rival DC Comics look good. After the release of X-Men at the turn of the century, Marvel started taking films seriously and their Marvel Cinematic Universe (known as the MCU) became so huge that fans started believing in its existence. That’s one of the reasons why most of the films in the highest-grossing list are from Marvel because they are close to the audience’s hearts.

However, that didn’t stop them from making mediocre films, and in the last 12 months, they have released three films – Venom 2, The Eternals, and now Morbius – that have more in common with their ‘90s ventures than those that ‘succeeded’ them. Add to that the failed Fantastic Four reboot a few years back and the Thor sequel before that and you have failed films from the same studio that gave us Avengers and Captain America!

Like the Marvel films from the last millennium, Morbius is very low-budget, follows the tried and tested pattern of two people with the same powers, but with a twist. Here, the bad guy who is lesser evil is actually the good guy, and if you know what that means, you shouldn’t miss Morbius. When he is good, he is crippled and handsome but when he is bad, he resembles Voldemort more than a vampire but isn’t crippled anymore. That’s what makes him a superhero, even if it means killing a few people here and there!

The film revolves around Jared Leto’s character Dr. Michael Morbius, who despite his Charles Manson hairstyle is a world-class doctor who suffers from a blood disorder. Since he is in search of the cure for that rare disease, he tries everything to save mankind in general and himself in particular, and is even eligible for the Nobel prize which he doesn’t accept. His aim is to make himself and his friend Milo (Matt Smith) normal again so that they can fulfill their lifelong dream of walking together like normal human beings instead of walking with sticks.

Sadly, Milo is as much greedy as he is needy, and when he finds out that Michael has found a cure that might have some side effects, he uses it without the good doctor’s permission, and becomes a blood-sucking vampire similar to Michael but without his ethical superiority. When Michael is framed for the murder of his nurse, he deduces that his childhood friend deceived him, and with the help of his lady doctor friend Martine Bancroft (Adria Arjona) decides to set things right before it’s too late.

If you think that the way Michael transforms a secret lab once used by criminals for counterfeiting $100 bills into a makeshift lab that manufactures artificial blood is hilarious, think again. No one notices when Michael suddenly quits using his crutches and starts walking normally, why wasn’t he apprehended when he was at his laboratory after ditching his girlfriend to escape a horrific scene, or why a dying friend calls him from his cellphone instead of dialing 911 that could have saved his life?

Directed by Daniel Espinosa (Safe House), Morbius leaves the audience with bad memories instead of good highlights. The good/bad setup between Michael and Milo reminds one of the first Iron Man where Robert Downey Jr.’s Iron Man is pitted against something similar created for the antagonist Jeff Bridges; or of the first Ant Man flick where two grown-up men don a suit that shrinks them, and then fight each other for supremacy. The rivalry here is so muddled and boring that you end up caring about no one, not even the good guy for he has also sinned.

Add to that the growing demonic face and you want the movie to end as quickly as possible. Sadly, the only creative thinking the director used in the film was done in the opening credits because after that, everything goes downhill. Jared Leto’s acting is, without doubt, the film’s highlight but it was overshadowed by the special effects which were as much part of the film as the actors. Yes, Tyrese Gibson was wasted as an FBI agent and Al Madrigal looked irritating, but when the picture is extremely low-budget, and their characters had nothing else to do, you get a movie that revolves around three Ms – Michael, Milo, and Martine.

And finally, something about the two abrupt and disturbing post-credit scenes, the only purpose of which is connecting Morbius and Spider-Man to Sony’s Spider-Man Universe (SSU). At first, I thought it was an April Fool prank but when I realized it wasn’t, it hurt me as an MCU fan. The frantic attempt not only makes Sony look desperate in cashing the Spider-Man franchise but also bores the fan who was expecting something better, something challenging especially before the release of the Dr. Strange sequel. One hopes that Morbius won’t be revisited anytime soon and Marvel revives its legacy after delivering yet-another failed venture!