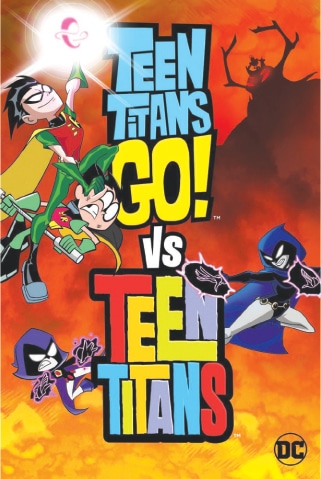 Life throws you challenges every now and then, but what would you do if it pits you against a better version of yourself? It will not just freak you out, but also teach you a few things that you would otherwise have realised with the passage of time.

That’s exactly what happened to the younger members of the Teen Titans in Teen Titans Go! Vs Teen Titans as they were made to fight against their better versions, in order to prove their worth. And they proved it all right — not by fighting each other but teaming up with each other, after initial reluctance.

Teen Titans in Teen Titans Go! Vs Teen Titans revolves around Raven (voiced by Tara Strong) and her inability to control her demonic half that was slowly taking over her. Her father Trigon (Kevin Michael Richardson) tries to tempt her to the dark side without success.

It is only when the whole Teen Titans team, including the impulsive Robin (Scott Menville), the half-machine, half-human Cyborg (Khary Payton), the never-serious Beast Boy (Greg Cipes) and the love-struck Starfire (Hynden Walch), is abducted by the Master of Games that they realise that everything is against them.

First, they were pitted against their more mature, taller and more able versions and second, they were instructed to eliminate them in order to gain freedom. Will the original 2003 Titans (the bigger ones) be able to convince the 2013 Titans (the goofier ones) of letting it go and fight together, or will the younger versions win the battle with their sheer youth, and unplanned attacks?

Whatever the result, watching two versions of the same character not only entertains the audience but also teaches them that even two same people from different age groups, can be poles apart.

A lot of ‘your team-my team’ happens between the two Titans teams, with one displaying immaturity and impulsive decisions while the other, showing that maturity and planning can be used as superpowers. Add a Worlogog to travel between dimensions, Santa Claus and his wife and battle between two dragons, and you get a highly entertaining flick with a double dose of Titans.

The flick may not be as sharp as Teen Titans Go! To The Movies, but director Jeff Mednikow does a commendable job to present the different versions of Titans in his own way. Kudos to the voice actors for lending their voices to two characters and sounding both goofy and mature at the same time. It is because of them that you not cheer for both the teams, but also secretly hope that none of them loses.

Be ready for a surprise as the film not only takes you into the world of Titans but also brings the Titans’ world to you. Watch the flick to find out, how!