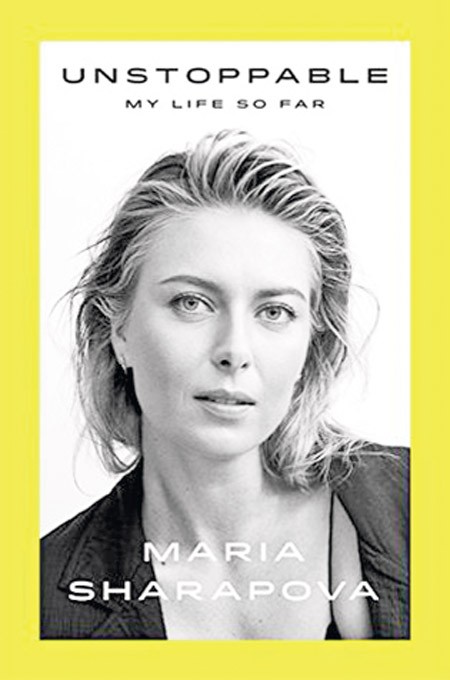 Would you believe if I told you that Maria Sharapova’s real name was not Maria; or that the height she has attained as an athlete was a result of a freak accident; or that she was once kicked out of an academy due to being underage? Each of the fact along with many others is true because I have read her autobiography Unstoppable – My Life So Far where she details her accomplishments, her failures as well as how she became one of the best players in the world of tennis.

This autobiography was supposed to be Sharapova’s parting gift to her fans at the end of her career that was supposed to happen somewhere in 2017 but after she tested positive for a banned substance, and was disallowed from playing, she used her off time to complete this book and launched it on her return.

The beautiful tennis star tells the readers that it wasn’t her fault that the banned substance was found in her blood. The substance was banned just days before. Many athletes in Europe were taking it. It had no side effects or didn’t enhance one’s performance, and that’s why she decided to fight the ban and managed to get the sentence reduced from 2 years to 15 months.

The Russian prodigy also discloses a lot of interesting things about her life and career. She reveals that she was affected by the Chernobyl accident. When that happened, in 1986, her mother was pregnant with her. She also discusses her father who helped shape her career as parent and coach. It was his father’s decision (on Martina Navratilova’s advice) to shift to the United States where there were more opportunities for a tennis player than in Russia; it was he who acted as her mother during those early days as her mother was waiting for her visa; he also rechristened her Maria because Marsha didn’t seem too American.

It is in this book that you find out that many coaches came and went in Maria’s life but only those who were sincere were remembered in the best possible way. She calls her stamina her superpower. She tells us how she was able to hit the ball even when she was hardly six years old.

A mystery couple saved the day when the Academy that invited them to America ditched them; there is also much more about Sharapova’s rivalry with Anna Kournikova whose mother had issues with the younger cute Russian in the Academy!

Sharapova writes authoritatively in the book; her memory, as well as that of those who gave their comments, must be commended as it shows how women tennis has improved in last few years: how she began to win tournaments where she played against her old academy mates; how she felt on attending the ball after winning her first Wimbledon and how she refused to switch from her natural playing style despite the advantages.

The way she describes her first tournament win, especially the grand finale against Serena Williams, seems too good to be true. In fact, she blames herself for the bad record between the two, as she believes that Serena takes revenge on her for listening to her cries after their first match ever.

The life and times of this five-time Grand Slam champion is sort of a lesson for all of us who want to reach the top.

Here there was a girl who had to sleep in a one-room apartment with her father, nurse him when he was sick.

The book chronicles the girl’s journey to stardom, how she handled her crushes, how she managed to win against the best and how she learnt from her defeats. Read it and know all there is to know about the Goddess of Tennis who may have fallen down but is still not out of the game!