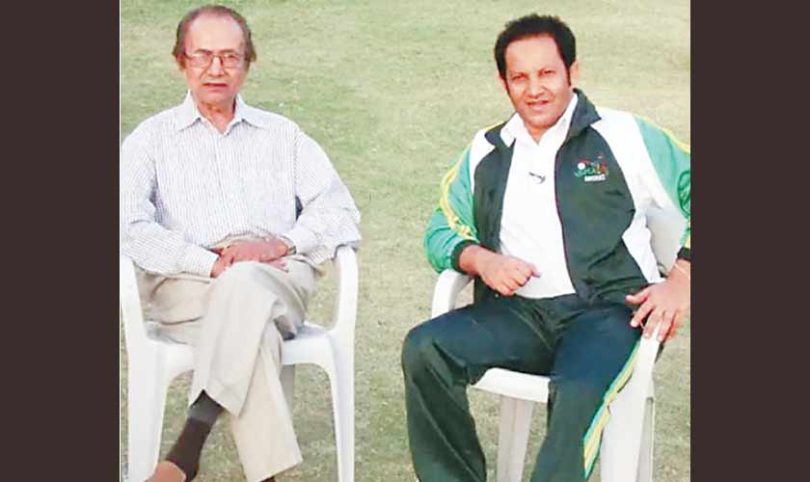 Will Azam Khan become known as his father’s son or will Moin Khan be referred to as his son’s father, that’s the question!

There are two kinds of fathers in this world – those who are followed by their sons, and those whose sons follow them so well that they end up playing second fiddle to them. With Azam Khan’s inclusion into the Pakistan side, the debate of ‘will he, won’t he’ resurfaces, as people start comparing him to his legendary dad Moin Khan.The problem is: no matter how well Azam Khan does, winning the World Cup, blasting the world’s best bowlers out of the park and taking unbelievable catches behind the wicket will always keep the father Khan ahead. However, with the kind of talent he possesses and the commitment he has shown to get into shape, Azam Khan might outdo his father in a few areas.

Till then, we can seek out those father and son duos who represented Pakistan, and managed to make a name for themselves as either their father’s son, or their son’s father!

Nazar Mohammad scored just one century for Pakistan in Tests, but during that knock against arch-rivals India in 1952, he remained unbeaten and carried his bat. Unfortunately, his career was cut short by an injury sustained in mysterious circumstances. Nearly thirty years later, his son Mudassar Nazar scored a bat-carrying century against India.

He went on to make his father proud by representing Pakistan as a genuine all-rounder in 76 Tests and 122 ODIs, scoring more than 6500 international runs, going past the 100-run mark on 10 occasions in Tests and winning his team matches through his 177 international wickets and nearly 70 catches. They are also the only father and son duo to open the batting, and the bowling for their side in a Test match – Nazar Mohammad once, and Mudassar Nazar in nine matches.

Hanif Mohammad was no ordinary batsman. He was Pakistan’s first superstar. He earned the nickname ‘Little Master’ long before Sunil Gavaskar and Sachin Tendulkar. Not only did he score a triple century in Tests when it was considered rare, he was part of Pakistan’s every Test victory in the 1950s and the 1960s, and mentored many cricketers, including his younger brothers Mushtaq and Sadiq. His highest first-class score of 499 remained a world record until Brian Lara broke it. His 3915 runs in 55 Tests and 12 tons remained national records for quite some time.

His son Shoaib Mohammad wasn’t far behind and had an eventful career in the 1980s and the early 1990s; at one time he held the record for highest ODI score for Pakistan and was considered the perfect Test opener during the early part of his career. And before Jonty Rhodes raised the bar with his fielding, Shoaib Mohammad was among the best fielders in the game. His career was comparatively shorter than his dad as he played 45 Tests and scored 2705 with seven centuries at an average of 44.

In ODIs, it was his fielding that outshined his batting. He managed 1269 runs in 63 matches. He was undone by his slow batting that saw his career go down as Cricket changed gears, but Shoaib Mohammad didn’t.

Majid Khan wasn’t just the most stylish Pakistani batsman of all time, he was also the most fearless, scoring a century before lunch in Test Cricket, scoring Pakistan’s first ODI century and winning matches for his country whenever he could. He scored over 4000 runs for Pakistan in Tests and ODIs, and struck eight centuries in Tests and one in the one-day format. In addition, he got 40 wickets and took 73 catches.

His son Bazid, however, didn’t have that kind of luck while playing for the country; his career consisted of just one Test and five ODIs and although he scored two fifties in the latter format, he couldn’t emulate his father. However, he did switch careers and became a broadcaster and is today considered one of Pakistan’s best English commentators who are widely respected around the world.

While Abdul Qadir revived the art of leg spin bowling when he made his debut in the 1970s, his son Usman revived his father’s legacy when he donned Pakistan colours in 2020. Abdul Qadir was feared by batsmen around the world for his deceptive bowling.

He was primarily a leg-break bowler who possessed different kinds of googlies and represented Pakistan in as many as 67 Tests and 104 ODIs. His 236 Test wickets included Pakistan’s best bowling analysis of 9 wickets for 56 runs. In ODIs, he was able to take wickets without conceding many runs.

Since his international debut last year, his son Usman has been doing wonders in T20I, making it difficult for his predecessor Shadab Khan to make a comeback. In his 11 T20I matches so far for Pakistan, he has taken 18 wickets with the best being 4 wickets in an innings for just 13 runs. Not only has his average been a decent 15 runs per wicket, his strike rate is 12.6, meaning he takes a wicket every 13th delivery. Would surely have made his father proud, had he been around!