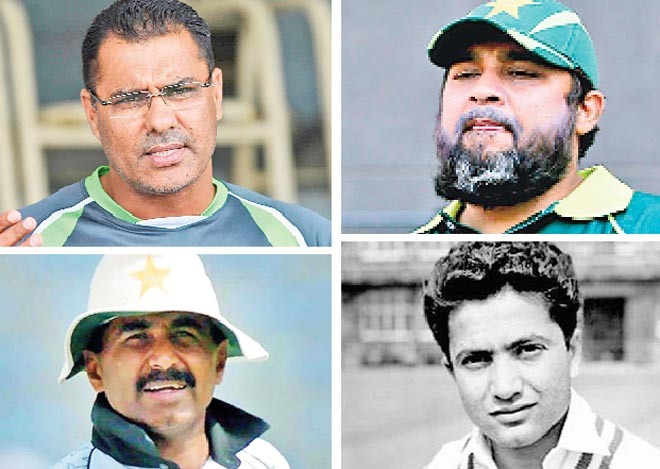 During their recent trips to England and Zimbabwe, Pakistan finally found a spinner who can bat (Shadab Khan) and a dependable opening pair (Fakhar Zaman and Imam ul Haq) minimising the dependency on once-certain-for-selection Mohammad Hafeez.

The 37-year-old, who turns 38 in October, has been around for over 15 years and with youngsters making a mark, it’s time he realised that he would be more of a liability to the side than a necessity.

As an opening batsman in two of the T20 Internationals he played in Zimbabwe, he fared badly and was immediately benched by the no-nonsense coach Mickey Arthur.

From dropping catches, especially off Mohammad Amir’s bowling, to blocking the selection of another all-rounder Abdur Razzaq (as per the all-rounder’s claims), Hafeez has been there and done that but it seems that his reign of terror is over, for good. We bring you a dozen national cricketers who didn’t get the farewell they deserved and whose ouster might be a lesson for ‘The Professor’ who should know when it is time to hang up his boots.

Pakistan’s first cricket star Hanif Mohammad was made to choose between his brothers’ careers over his own in 1969 by the people at the helm; Hanif opened the innings with the youngest brother Sadiq whereas Mushtaq Mohammad took one wicket in the drawn encounter.

In his autobiography Playing for Pakistan, he laments playing his 55th Test when he was just 35 and 85 runs short of becoming the first Pakistani to cross the 4000-run milestone.

This elder cousin of Imran Khan was one of the best top order batsmen Pakistan ever had. With age, his reflexes became slow and he was made to play in the middle order in the 1980s. His career ended at the age of 36 with a duck in the same Test in which Kapil Dev took eight wickets in an innings. The Majestic Majid was never again selected for Pakistan although his son Bazid played one Test for the country.

Javed Miandad was the most loved cricketer in the country when he was dropped from the Test team in 1993; it was only after the intervention of the then Prime Minister Benazir Bhutto that he made a comeback in the World Cup in 1996 to create a record of being part of six World Cups. Miandad was nearly the last man standing when India defeated Pakistan in the quarter-final at Bangalore, bringing curtains on a career that lasted over 21 years.

The younger Raja was a stylish batsman who excelled in limited overs but with the emergence of Shahid Afridi and Saeed Anwar’s opening pair and Ijaz Ahmed making No 3 slot his own, the 35-year-old had to go, especially after Pakistan crashed to 4-1 in the Sahara Cup against India under his captaincy. Rameez was bowled for a first-ball duck in his final appearance and chose to begin his innings behind the microphone where he is still going strong.

During his career, Saeed Anwar always came back after being either being dropped or having been ill; his majestic knock of 194 came after he was sidelined for 5 months due to a mystery illness he caught in Australia in 1996. His final comeback saw him score his 20th and final ODI century, that too against arch-rivals India, in the 2003 World Cup, but as rain shortened the next encounter, it was curtains for the left-handed genius.

He may have won many matches for Pakistan but Waqar Younis never represented his country after the team’s failure to reach the Super Six round of the World Cup in 2003. Just two years ago, he had been in the prime form of his life, taking 13 wickets in two ODI matches. He bowed out at the age of 31, leaving a lot of his potential untapped.

Rashid Latif was easily the best wicket-keeper who represented Pakistan as he rarely missed a chance behind the stumps, unlike his competitor Moin Khan, who missed many. His career was cut short after he claimed a catch against Bangladesh when replays showed that the ball had clearly touched the ground. Although it wasn’t that big a mistake, Kamran Akmal’s superior batting ability ensured that Rashid the Lion Heart never played for Pakistan again.

Pakistan’s World Cup campaign in 2007 was marred by controversies — first, their coach Bob Woolmer died in his room after the team’s loss to Ireland, and second, the team failed to reach the second round. Inzamam’s ODI career ended in tears as the team exited the mega event. He lazily got himself stumped in his farewell Test against South Africa, failing to break Miandad’s record of most runs for Pakistan in Test Cricket.

This classy batsman hasn’t yet retired from the game, insisting that he will be available for selection whenever the team needs him. Once considered the best batsman in the world, especially after his record-breaking feat of 1788 runs in 2006, he wasn’t selected for ICC World T20 and left Pakistan for rebel Indian Cricket League. He did make a comeback to the national team and even led the side Down Under but after failing to score in England, he was replaced by Misbah ul Haq who went on to become Pakistan’s most successful Test captain.

Pakistan’s best all-rounder since Imran Khan was treated shabbily during his last few years by Mohammad Hafeez and it seems that the Professor is going through the same treatment. Razzaq quit the national side first after being dropped ahead of the 2007 World T20 but made repeated comebacks and was even part of the second edition of the World T20 which Pakistan won in England in 2009.

The fastest bowler in the world left the game after Kiwi batsman Ross Taylor was dropped not once but twice off his bowling off consecutive deliveries during the World Cup in 2011; Kamran Akmal was the culprit on both occasions but ‘The Rawalpindi Express’ blames coach Waqar Younis for not selecting him in the final XI of the semi-final against India. Whoever was responsible, Pakistan lost the match and India won the World Cup!

The magician was Pakistan’s leading wicket-taker when he was banned for ‘chucking’; he became a liability after his reformed bowling action and despite repeated chances didn’t seem to impress the selectors and the followers of the game. He first withdrew from the 2015 World Cup and quit the game soon after. He now lives a life away from cricket, appearing on TV as an analyst when some series is being played.