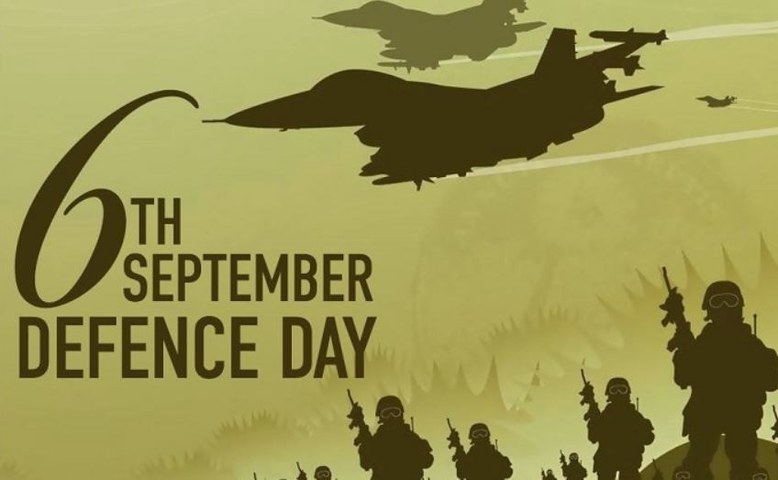 It might not be as big as Independence Day, but Pakistanis celebrate Defence Day on 6th September with as much passion as 14th August. It was on this day of September 55 years back that the Pakistan Army defended its borders against enemy Indian forces and didn’t let them gain an inch of our territory. To commemorate this day, many Defence Day anthems have been composed, aired and become popular but this 6th September we have shortlisted the 6 Immortal ones that seem to grow more popular with the passage of time. To make it easier for the listeners, we have selected the best ones in Urdu between the 1950s and the 1990s, because that was the time when the best ones were composed. Even after so many years, these patriotic songs still give you goosebumps and make you even more proud of being a Pakistani.

Even before the 1965 War, our music composers had become an expert on songs that would defeat the enemy with words; this song from film Changez Khan (1958) motivated soldiers and the public during the 1965 War as it was replayed on countless occasions. Sung by Inayat Hussain Bhatti, the lyrics are enough to raise your moral as well as raise your blood pressure in a good way. What else would you do if the song tells you that there is nothing better than defending your land, defeating anti-Muslim forces and that these instructions are in the Holy Quran! Add to that the Allah o Akbar chorus and it gives you goosebumps even after so long. Allah o Akbar!

There were two kinds of people fighting for their country in 1965 – those who donned the uniform and those who were raising their morale. Madam Noor Jehan was leading the pack with her power-packed patriotic songs and Rang Laye Ka Shaheedon Ka Lahu was one such number. Although she sang many other songs during the same war, this one remains close to the heart even after 55 years. She gave life to the wordings of Tanveer Naqvi at a time when radio was the biggest medium (TV was in its infancy) and reached the soldiers who were busy saving their motherland. It energized them so much that they made the enemy go back and never return!

Naseem Begum’s immortal song was an amalgamation of strong lyrics, mighty composition and vocals that had no match; although written by a lesser-known Musheer Kazmi and composed by Saleem-Iqbal, the lyrics are so true even to this day that listeners get teary-eyed at the mere mention of the song. The song refers to those martyrs who sacrificed themselves for their motherland but are now closer to the Holy Prophet Mohammad (PBUH), Hazrat Ali and the biggest martyr of all time, Hazrat Imam Hussain. It also tells the listeners that Shaheed is always alive because they defended the honour of their mothers and sisters, and till Judgement day, they will receive salutes from the wind that passes through Pakistan.

Music composer Niaz Ahmed composed countless TV songs during the 1970s, but it was his patriotic numbers that strengthened his career. Sung by Khalid Waheed as a Jingle for an ad campaign back in the 1970s, Har Ghari Tayyar remains the most listened and most loved song dedicated especially to the Pakistan Army. The beat reminds you of the Army band whereas the other instruments are also chosen precisely to give the same touch. The talented Khalid Waheed who was at ease at both classical and pop songs used his range to give his ultimate salute to the Armed Forces, and let the lyrics do the rest. It was recently remixed with the current crop of rock stars but doesn’t match the original one; the pitch of Khalid Waheed’s voice matched the energy of the soldiers who are always ready to serve their motherland, day or night, without demanding anything.

Pop icon Alamgir is famous for the countless patriotic songs that he sang during the 1980s; however his first and only song for the Pakistan Air Force ends up as the winner because of its catchy tune, powerful lyrics and wonderful rendition. Composed and sung by the maestro in the early 1990s, this song featured the eternal words Shaheed Ki Jo Maut Hai Woh Qaum Ki Hayat Hai; no words can match the intensity of these words that were immortalized by the singer. Be it the Defence Day or the PAF Day on 7th September, Alamgir ultimate tribute to the Armed Forces is yet to be bettered!

Junaid Jamshed’s father was in the Pakistan Air Force and he was a PAF brat when he sang Dil Dil Pakistan. In Vital Signs’ second album, he paid tribute to the love of his life Pakistan Air Force through this wonderful song that was penned by their ‘in-house’ patriotic lyricist Hasan Akbar Kamal. The team that gave the listeners Yehi Zameen, Hum Hain Pakistani and Maula began their association with this PAF song that moved at an electrifying pace, just like a Fighter Jet when it catches an enemy plane in its sight. Like Har Ghari Tayyar this song was also remixed but the original version remains the best as it captures the mood of the listeners as well as captures the flight of fighter jets, the kind of aerial photography, we hardly saw before this song.