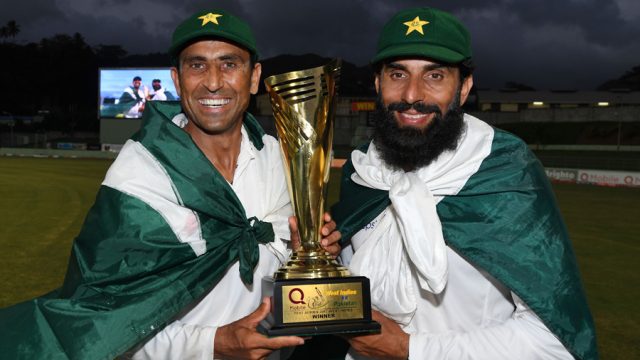 By: Omair Alavi It was a sight to die for … the players carrying captain Misbah ul Haq and former skipper Younis Khan on their shoulders after a victory that they snatched from the jaws of a draw. The whole team showed their gratitude to Younis Khan and Misbah ul Haq for their contribution to…

It was a sight to die for … the players carrying captain Misbah ul Haq and former skipper Younis Khan on their shoulders after a victory that they snatched from the jaws of a draw. The whole team showed their gratitude to Younis Khan and Misbah ul Haq for their contribution to the sport and to the country. The two cricketers left the game as happy men as Pakistan won their first ever series in the Caribbean, and that two with just one over to spare.

The reason why Pakistan managed to win the third and decisive against the West Indies after losing the second one was simple – a proper team was selected rather than going for experiments. Ahmed Shehzad was rightly dropped and Wahab Riaz was rightly asked to stay out of the final XI; Shan Masood and Hasan Ali took their places. Although Shan couldn’t impress on his comeback appearance, Hasan did on debut taking 3 decisive wickets in the fourth innings to bring Pakistan closer to victory. His success proved that the decision to field 2 leg-spinners in the second match was a bad one, and had Hasan Ali been part of that match, the result could have been different.

And then there was 25-wickets Yasir Shah who excelled beyond imagination. The leg-spinner succeeded where other leggies like Intikhab Alam, Mushtaq Mohammad, Abdul Qadir, Mushtaq Ahmed and Danish Kaneria couldn’t and that speaks volume for his greatness. It was his googly that sealed the historic win and he was rightly adjudged the Man of The Series for his brilliant performances. Mohammad Abbas played all 3 matches of the Test series and came out as the find of the tour – one hopes he is used intelligently by the future captains otherwise he might injure himself like other right-armers who have been tried, tested and later dropped by the management.

One must mention Azhar Ali’s ‘contribution’ who scored 2 centuries in the series as an opener. The former ODI captain scored his runs at a very slow rate and if he wishes to make the number 3 position his own – he might have to move back to number 3 position to fill the gap left by the seniors – he must learn to score at a better strike rate. Its 2017, not 1977 when players used to play for a draw and score their runs at snail’s pace; had Pakistan not won this encounter, all blame would have fallen on those batsmen especially Azhar Ali who bored the spectators with colorless batting.

On the whole, it was a victory for a team that gave its 100 percent to ensure that the captain and senior most batsmen went out in style. One hopes that the juniors now step up and deliver even after the exit of the dependable batters because that’s exactly what Misbah and Younis will want from them. The dynamic duo’s legacy is here to stay and I am certain that with continuous selection, Pakistan can develop a pool of players who could go onto fill the void left by these irreplaceable legends.