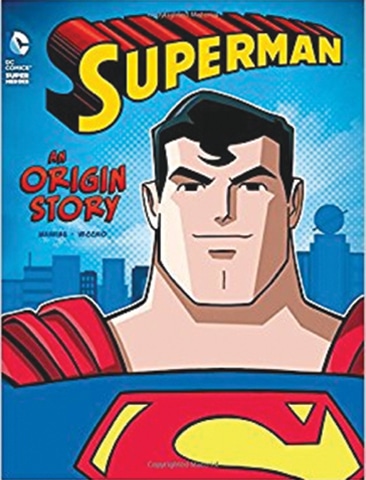 We all have heard or read this line: ‘It’s a bird … it’s a plane … no, it’s Superman’, but do you know that Superman is a strange visitor from another planet who fights for the truth, justice, and the American way!

Superman: An Origin Story tells you all there is to know about the Man of Steel and how he became Earth’s saviour and continues to be so till this day.

Superman’s birth name, his home planet Krypton and his parents and why they risked their lives to send him to Earth and everything you want to know about Superman is here. Readers can also know about their favourite superhero with the help of illustrations and text; the text is also quite easy to read. If you didn’t know who Kal-El was or what does the symbol on his costume means (it doesn’t stand for Superman!), look no further as this book has it all.

The readers must also thank Matthew K Manning for writing Superman like never before.

How he felt when he first discovered that he had super-hearing or that he could see through walls; what his reaction was when he found out that the Kents weren’t his birth parents or that he could fly — every reaction of the superhero has been documented in both texts and images to make it easy to understand and remember. So the next time you think of Superman, think of his struggle as a youngster, as an ace reporter and above all, as an alien from outer space.

Two sections in the book – Glossary and Questions – add colour to this wonderful book; the diagram showing Superman’s powers as well as weaknesses will surely improve your knowledge about him. Even his arch enemy Lex Luthor, finds a place in this book as do his friends Lois Lane and Jimmy Olsen with whom he shares his first adventure.

And guess who gave him the name Superman? Well, to know that you will have to read this book that tells you all about the world’s most famous and most loveable Superhero. Up, up and away!