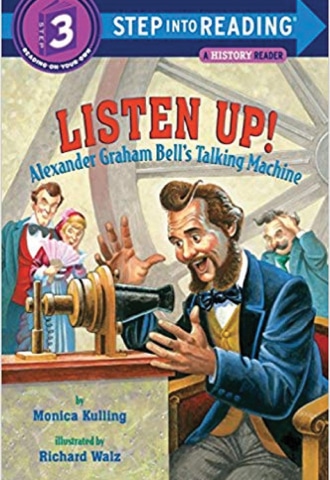 Believe it or not, once upon a time when there were no mobile phones or even a telephone. In those days, people used to rely on letter writing and in some cases used telegrams to deliver their message quickly to the other person.

However, there was a youngster who thought about sending voice through cables and invented the machine that we all know as telephone, the first step towards mobile phones as we know it.

Who was that man and how did he achieve his dreams? The book Listen Up! Alexander Graham Bell’s Talking Machine tells you all you need to know about the genius behind the invention.

The book starts from the youth of a wannabe scientist named Alexander Graham Bell, who is shown to be fascinated with sound since his childhood. When he grew up, he thought that if sound can shake a wire, can it cross one and that’s why he teamed up with another youngster, Tom Watson, and began to work on a machine that would enable people to send and receive sound, no matter what the distance.

How he managed to make the device work and what happened to them when they went to the world fair at Philadelphia, is what this book discusses. That one event changed his and our lives forever.

The best thing about this Step 3 reader is that it is not just easy to read, but also easy to understand. The illustrations make you realise what the text means, whereas the drawings of the initial telephone, as well as other inventions that were up for display at the fair, is just fascinating. Although you get to know that Alexander Graham Bell’s invention was not placed at the main display, it managed to win the award for the best invention. It also details the apprehensions of the first telephone users as some thought it would spread disease with sound and a few claimed it was violating their privacy.

Through this book, you will also find out many new things such as the hardships behind the development of the first telephone, what was the first word spoken between two people and how can one person defy all odds to make his dream a reality.

The next time you handle a telephone or use your mobile phone, thank Alexander Graham Bell for it was because of him that we are communicating with people on the other side of the world, without any issues.