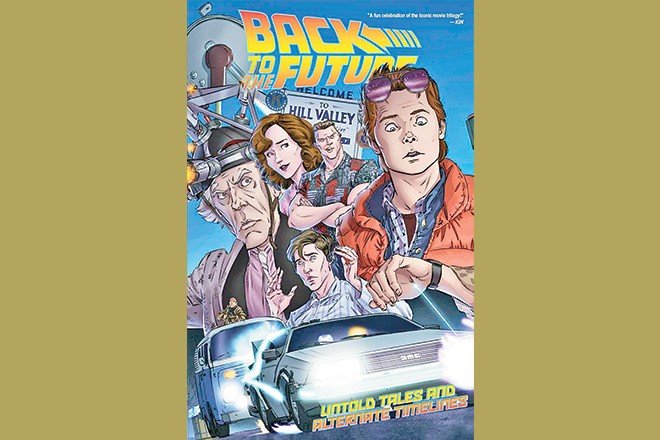 Movie lovers who obsess over science fiction, and have seen the Back to the Future trilogy, have surely come up with various ‘what if’ theories revolving around the films, especially regarding traveling back and forth in time. With Back to the Future: Untold Tales and Alternate Timelines, co-creator and co-writer of the series Bob Gale joins hands with his ‘illustrious’ team to share some Untold Tales and Alternate Timelines for the first time since the trilogy ended in 1990. And Great Scott, we sure failed to think alternatively here, big time.

If you didn’t know anything about Doc Brown’s involvement in the super-secret Manhattan Project, or how he met his prodigy Marty McFly or what happened to Doc’s house that was destroyed in the 1960s, this book tells you all. Since it is published like a comic book and not like a novel, it is quite easily understandable, even by young fans who have just discovered the franchise on Netflix. It is much better for reading as it keeps the audience’s imagination close to the franchise where supporting characters are also given importance, as every thing counts in time travel.

There are many stories in the book that should have been included in the animated series, and with fans wanting another Back to the Future movie, any story can be used as a plot for the next one. Don’t believe me, believe the alternate stories, which could have happened on the sidelines of the franchise, that educated us all regarding time-space continuum. In When Marty Met Emmett, we get to know that the teenager was helping himself rather than the Doc when they first met; in Looking for a Few Good Scientists we find out how Emmet was scouted for greater things at a time when the World was at war. If you want to know how Doc Brown shortlisted the DeLorean or what happened to Marty’s future parents after he left them in the past (tricky, isn’t it?), you will have to go through these pages, especially In Search of Calvin Marty Klein.

And then there was Biff who stole the Time Machine in 2015, but we have no idea how he landed back in 1955, until you read Jurassic Biff in which he ends in the era of the dinosaurs. In Peer Pressure both Doc and Marty join forces to save the identity of DeLorean even before it became a time machine, whereas in Emmett Brown Visits the Future, the readers get to know about his financers and there is one hint I can give – he rides in it. And finally, in Clara’s Story, we get to know the backstory of Emmet Brown’s wife and the mother of Jules and Verne. What made her take up teaching science in the 1800s, why she found the elderly Emmet attractive and why she named her kids after the Around the World in 80 Days author.

You have to know about Back To The Future if you want this book to make some sense; otherwise treat it like a comic book collection that time travels and allows you to relive the timeless pop-culture phenomenon. The illustrations here are first-rate as all characters are drawn keeping the original film actors in mind. There is Bob Gale’s Foreword, which clarifies a lot of misconceptions for the readers, fans and time travel wannabes.

Get ready to go on a timeless trip, because where you are going, you won’t need roads, only imagination.