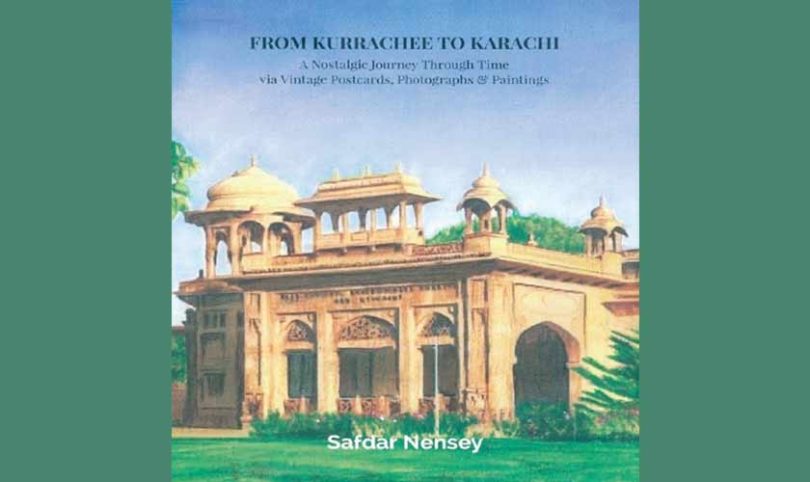 Pakistan may have come into existence in 1947, but its rich history and cultural heritage are centuries old. Author Safdar Nensey tries to highlight these qualities in his two books about two of the biggest cities of Pakistan. He writes that his work is “intended to be neither a piece of visual art nor a traveller’s guide.” The books are his way of showing gratitude to the two cities. There is more to Karachi and Lahore than meets the eye, Nensey says.

His first book, From Kurrachee to Karachi: A Nostalgic Journey through Time via Vintage Postcards, Photographs and Paintings, takes the reader back to a time when Karachi was not only less populated but also cleaner, more spacious and, above all, better maintained. With the help of countless photographs, paintings and postcards of the city from the past 100 years or so, the author manages to show the readers a Karachi they may not know even existed. It was a well-kept port city, with buildings in the Victorian, Edwardian and Gothic styles of architecture, where merchants from all over the country would trade.

What makes the Jahangir Kothari monument an important monument in the city? What was II Chundrigar Road known as before it was renamed in the late ’60s? What happened to the Frere Street station? This book answers many such questions and gives the readers a chance to visit their own city as a traveller. After all, when people from out of the city visit Karachi, they visit these culturally-rich buildings and areas that locals take for granted.

There are many buildings in the city that we may pass by daily on our way to work; each one has its own history, and their stories are told in this book. Not many people know that the Karachi Port Trust and Bombay’s iconic Gateway of India were designed by the same architect; that Haji Abdullah Haroon was laid to rest in his favourite charity or that The Islamia Orphanage for Boys and the High Court building were built with Jodhpuri/Jaipuri stone.

Although the author is a petroleum engineer by profession, his love for vintage postcards and priceless photographs helps Karachiites fall in love with their city. He has divided the buildings, streets, religious places, hospitals and hotels into separate chapters, making it convenient for both reference and light reading. The language is also easy to understand and if you want to travel the city without leaving the comfort of your chair, this book is your guide.

Once you read this book, you realise that it’s Native Jetty not Netty Jetty; Zaibunnissa Street was called Elphinstone Street even after partition and MA Jinnah Road was earlier known as Bundar (meaning ‘port’) Road – not Bandar (meaning ‘monkey’ in Urdu) Road, as is incorrectly perceived. The book details the history, the architecture and date of origin of many important buildings, streets and areas of the city, making it an enjoyable read for people of all ages.

There is more to Karachi and Lahore than meets the eye, Nensey says

The illustrations that were commissioned for the book depict a city that is full of architectural marvels that have stood the test of time, despite the pollution, floods and urban development. If you didn’t know what stood opposite the Pearl Continental before the Sheraton (or Movenpick), or that there is a mosque known as Pakola Masjid because of its proximity to a neon ad for a soft-drink, you don’t know all of Karachi. This book teaches readers the rich history of a city that evolved in the Mughal era, was developed in the British era and has been mishandled by those who took over after Independence.

Nensey’s second book is called The Lore of Lahore: A Nostalgic Journey through Time via Vintage Postcards and Old Photographs. After showcasing the old Karachi to the world, he turned his attention to the city that would be impossible for a traveller to cover in a lifetime. The book tells the story of Lahore – from how the city was named to why it held a significant place in the hearts of the Mughals, the Sikhs and the British, who fell in love with the city as its rulers.

Unlike the Karachi book, this one seems to have been compiled in a hurry, because it hasn’t been divided into planned chapters and feels more like a quick guide to Lahore than a sequel to the earlier publication. Yet, the priceless photographs, the vintage postcards and striking illustrations showcase a magnificent Lahore.

The author compensates for this problem with iconic pictures of the city where renowned novelist Rudyard Kipling spent many years, where many Mughal emperors have their final resting places and where many historical buildings have been maintained. His love for the Walled City is obvious in his selection of photographs, which show the glorious past as well as the current state of disrepair of many monuments that were built by the Mughals, ransacked by the Sikhs and restored by the British during their reigns.

He also discusses the history of many monuments, including Hiran Minar, which is not situated in Lahore but in Sheikhupura for an important reason, the majestic Badshahi Masjid, the Wazir Khan Mosque and the Saruwala Maqbara. Readers can learn about the history of many educational institutions in the city, such as the Government College University, Aitchison College and the Mayo School of Arts (now the National College of Arts).

Since Lahore is more colourful than Karachi when it comes to scenic beauty, a reader would expect more colour in The Lore of Lahore, but that is not the case. In the case of the book on Lahore, the text makes for a more engaging read. Unlike Karachi, Lahore was always the centre of attraction for rulers. It is still loved by whoever rules the province. Although some of the monuments and heritage sites have been in danger of being destroyed for development purposes, thankfully a lot has been preserved.

It’s sad to see that while many metropolitan cities of the world have improved over time, Karachi and Lahore have deteriorated. Back in the day, these cities were treated like homes. But, in the fast paced evolution of these cities, we have forgotten to appreciate beauty and preserve culture. These books can help us realise that the cities we live in are gifts from the past that should be restored to their former glory.