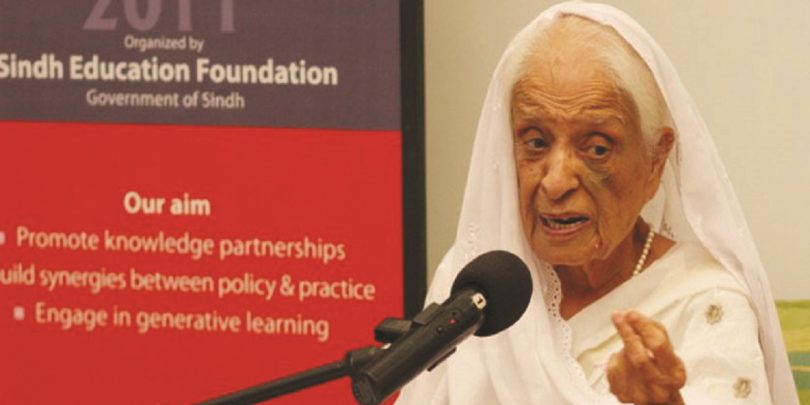 We’ve lost countless phenomenal women over the years, and like every year, strong women who made an impact in others’ lives are remembered. They can be from the field of writing, direction, or even music, and their contribution is immense considering all these fields are male-dominated. We pay tribute to eight such women, who came, who saw, and who conquered the world in their own way.

It wouldn’t be incorrect to say that without Fatima Surayya Bajiya, Pakistan Television might not have achieved the fame it eventually did, for she was the first female playwright to take TV under her wings, not the other way around. When she joined PTV, she was the eldest sister of playwright and satirist Anwar Maqsood, late Zubeda Tariq, poet Zehra Nigah and designer Bunto Kazmi, but soon became the Bajiya of the entire country. She began adapting renowned Urdu novels into plays and made sure that every drama of hers sent the right message to viewers across the country.

Be it Shama, Afshaan, Ana, Zeenat, Aabgeenay, Ghar Aik Nagar, or Aroosa, Bajiya’s plays were loved by all. She started the trend of introducing a new hero or heroine in her plays and from there came Jawed Sheikh, Ghazala Kaifi, Izhar Qazi, Mehreen Ilahi, Adnan Siddiqui, and Mishi Khan, to name a few. That’s not all, she also started the trend of Mehfil-e-Milad on PTV and hosted it for a long time, and only handed over the duties when ill health didn’t allow her to continue. She died in 2016 at the age of 85, but not after inspiring an entire generation with her intelligence, and her elderly love.

Bano Qudsia wasn’t just the wife of novelist, playwright, and intellectual Ashfaq Ahmed, she was equal to her husband in every way. Her novel Raja Gidh is considered a modern Urdu classic that she wrote in the 1980s. Her other prominent writings include Aik Din, Footpath Ki Ghaas, and Hawa Kay Naam while her plays Aadhi Baat, Tamasil, Seharay, and Khaleej are still popular after so many years.

She and Ashfaq Ahmed were considered the first family of PTV during their association and presented solutions to every problem on TV. Those who grew up watching them and especially her on TV are the lucky ones, for she always spoke and preached at the same time as if she understood the issues that followed the younger generation. The entertainment industry became poor with her death in 2017 and recently her death anniversary was celebrated by Google with a Google Doodle.

The evolution of TV in Pakistan can be divided into two parts – before Haseena Moin and after Haseena Moin. When she began writing for TV, her contemporaries used to adapt short stories, novels, and foreign dramas in Urdu. Haseena Moin was the first one to write an original script and showed her fellow playwrights that creating original characters was more successful and long-lasting than adapting others’ work. From the 1970s till the 2010s, she was active as a writer, however, 1980s and 1990s could be termed as her most successful eras.

Be it Shehzori, Kiran Kahani, Bandish, Ankahi, Tanhaiyyan, Dhoop Kinarey or Kasak, Haseena Moin was always on top of her game. The protagonist in her dramas were mostly women, while men played second fiddle, or were there for comic relief. Every character in her dramas was relatable to the audience and that’s why her plays are still remembered even after so many years. Her untimely death last year in the same month left her fans, followers, and family devastated.

Some people live a life where they do a certain thing, and then leave whereas there are a few who do everything in their short life and excel at in them all. Renowned playwright, poet, and advertising executive Asma Nabeel was one such soul who didn’t live a long life but impacted so many with her work that she is still remembered after her death. She spent most of her career in advertising but achieved fame as a playwright in Pakistan, and as a poet in Bollywood, and would have achieved a lot had she not died lost her life to breast cancer.

Each and every one of her dramas tackled a serious subject that was either considered taboo or not considered worthy of discussion on TV or film. While Khuda Mera Bhi Hai dealt with the issue of acceptance of unisex children in society, Khaani revolved around a real-life incident where a young girl loses her twin brother in a fight with a rich spoilt brat. Surkh Chandni tackled the issue of acid victims, Damsa dealt with child abductions and Baandi highlighted the ill-treatment of maids in Pakistan.

She also made her debut as a lyricist in Bollywood and her song Chand Lamhe (performed by Shilpa Rao) featured in Kajol’s Helicopter Eela. She even wrote the film Maan Jao Naa that launched the career of Elnaaz Norouzi who later went on to become part of the Netflix series Sacred Games.

She may have died at the age of 35, but Nazia Hassan achieved immortality through her music, her songs, and her charity work. If Alamgir and Shehki are considered pioneers of pop music in the country, Nazia is credited with bringing disco music to Pakistan. She was hardly fifteen years old when she won the Filmfare Award for Best Singer in Bollywood, for Aap Jaisa Koi in Qurbani. She and her brother Zoheb Hassan then took Pakistan by storm and changed the way pop music was presented on TV.

With songs like Dosti, Disco Deewane, Boom Boom, Aag, Dum Dum Dee Dee, Aankhen Milane Walay, Dil Ki Lagi, and Tali De Thalay, she became Pakistan’s first-ever female pop star whose popularity rivaled those of the male pop stars of that time. She also did playback singing for multiple Bollywood flicks in the 1980s most notably Star, Dilwaala, Ilzaam, and her Disco Deewane song was paid a tribute in Student of the Year.

Along with Zoheb Hassan, she released five albums during 1980 and 1992 and left the music scene when she was on top of her game. Her untimely death in August 2000 left her fans shattered, but her songs keep her alive even two decades after her last bow.

In the 1960s, most of the boys in Pakistan were madly in love with Shamim Ara, whereas the girls wanted to copy her speech and her hairstyle. This claim was made by veteran actor Mustafa Qureshi who made his debut against the screen beauty in Lakhon Main Aik. From being the leading lady of Pakistan’s first color film Naila in 1965 to turning to production and direction in the 1970s, Shamim Ara had an eventful career. She started as a young actress in the 1950s and migrated to major roles in films like Saheli, Qaidi, Humraz, Aag Ka Dariya, Devdas, Doraha and Salgirah.

In the 1960s she was considered a force to reckon with, and while she was on top of her game, she first added production to her CV by producing Saiqa and later turned director when younger actresses came onto the scene.  Her famous films as a director included Playboy in the 1970s, Haathi Mere Saathi, Munda Bigra Jaye, and Pal Do Pal in the 1990s, besides the funny named Miss Hong Kong, Miss Singapore, Miss Colombo, Lady Smuggler, and Lady Commando in both the 1970s and the 1980s. She introduced many actors and actresses from TV to films and saddened her fans and family with her death in 2016.

No actress turned director has called the shots of more films in Pakistan than Sangeeta who is still active in the industry since the late 1960s. Born Parveen Rizvi, she began her career as a child actress through Kohinoor in 1969 and within a few years was amongst the leading actresses of the era. While her contemporaries were busy acting in front of the camera, she decided to turn producer and director in the mid-70s and has been managing acting, production, and direction since then. Her first film as a director Society Girl was a huge hit that was followed by the classic Mutthi Bhar Chawal and Thori Si Bewafai in the 1980s and Khilona and Nikah in the 1990s. She currently acts on TV while occasionally dabbles into direction, however many actors of today credit her for their success.

Usually, in Pakistan, successful heroines mature into successful character actors and go on to play character roles when they grow old. However, the first person to break the circle was none other than Sahira Kazmi, PTV’s most successful actress turned director. She was amongst the top actresses of the ‘70s who had countless successful TV series to her credit including Qurbatein Aur Faslay, Parchaiyan, and Teesra Kinara. She began directing in the mid-80s and for ten years delivered hits after hits, mostly with female writers of the era.

With Haseena Moin, she delivered Dhoop Kinare and Aahat, with Noorul Huda Shah she created Tapish and Hawa Ki Beti, all of which were quite successful back then, and still have a cult following because of their longevity. While her dramas Rozee (written by Imran Aslam), Nijaat (Asghar Nadeem Syed), and Zikr Hai Kai Saal Ka (Dr. Enver Sajjad) were penned by male playwrights, they had strong female leads, and in Rozee’s case, a stronger female than a man. She has been inactive for two decades now, but she and Rahat Kazmi’s son Ali Kazmi is making Pakistan proud by working on both national and international projects.

And then there was Malika-e-Tarannum Noor Jehan, the ultimate female game-changer in Pakistan. She was already a superstar when Pakistan achieved Independence and was an inspiration for newcomers like Lata Mangeshkar and Asha Bhosle to name a few. Had she stayed behind in India after Partition, she might have had a great career, but she chose to migrate to Pakistan, and achieve greatness instead.  During the 1950s, she continued to act and sing songs in both Urdu and Punjabi movies most notably in Chan Wey, Dopatta, Anarkali, Neend, and Koel to name a few.

Be it acting, singing, or dancing on the screen, she set benchmarks and launched trends with whatever she did. She switched to playback singing in the 1960s, and sang for films till the late 1990s, delivering countless hits in both Urdu and Punjabi. Her patriotic numbers Aye Watan Ke Sajeelay Jawanon, Aye Puttar Hattan Te Nahi Wikde , and Har Lehza Hai Momin were so popular that even after 50 years, they give goosebumps to listeners.