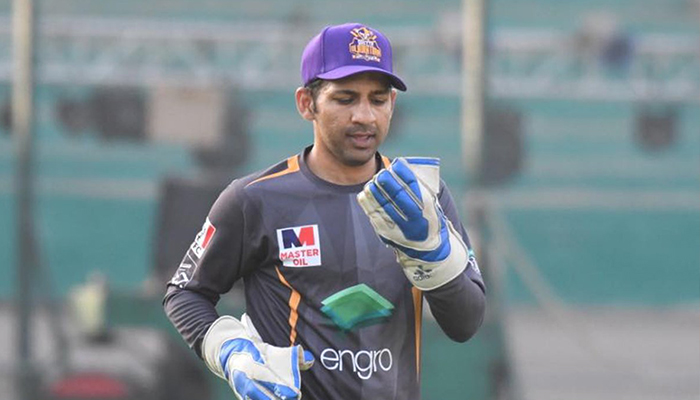 The sixth edition of Pakistan Super League isn’t just a cricket tournament. It has all the ingredients of a Hollywood blockbuster. Nearly every match had a surprise twist, nearly every encounter had a ‘Ben Hur’ kind of feel, and every act on the field reminded the viewers of something ‘Hollywoodesque’. Out of all the 14 matches that were played in what we can term as ‘Phase 1’, we have shortlisted some such ‘characters’ which will stay with us until the event’s resumption.

Before the PSL, he was known as Babar Azam’s predecessor, the wicket-keeper that Mohammad Rizwan replaced and the fighter who led Pakistan to the ICC Champions Trophy in 2017. After Phase 1 of PSL, he is known as the Captain with ‘Anger Management’ issues, and you can easily replace Adam Sandler’s character with Sarfraz Ahmed in the movie also featuring Jack Nicholson. He was cool when he had the bat in his hand, dispatching bowlers to all parts of the ground, but behind the wickets, he was like someone possessed by the Devil. From shouting at his teammates to staring at them with anger, Sarfraz was at his ‘animated worst’. That’s not all. Many players in the Quetta side would be ideal candidates to replace the Chinatown star, for everyone of them made Sarfraz angry, and no one liked him when he was angry!

His team might have lost more matches than it won, but Mohammad Rizwan was in phenomenal touch as a batsman. He seems to have continued his form from the Test and T20I series against South Africa where he scored two international centuries in a week, and hasn’t looked back since. Not only has he scored the most runs after the completion of five matches (297 runs), he crossed 50 on more occasions than any other batsman (besides Babar Azam who also has 3 half-centuries), hit the most number of boundaries (35 fours, 6 sixes) and faced the most deliveries (212), which shows the kind of form he is in. Whenever the league resumes, his team would want him to continue from where he left, so that they might reach the top three before the final round.

He may act like a macho man but Wahab Riaz was clueless throughout Phase 1 of PSL 6. From breaching the BioSecure Bubble before the start of the tournament to going for over 50 runs in his four overs twice, he proved that he was dropped rightly from the national side. Youngsters have taken his place in the Pakistan XI and while he continues to take wickets, he is hardly your go-to bowler for who knows what kind of mood he might be in. More like the Alicia Silverstone character in Clueless where she was full of herself but had zero substance. What else would you call a person who first gives away 51 runs off 24 deliveries on 23rd February, and then ‘betters’ it with 54 runs off his four overs three days later, that too as the Captain of the ship!

Winning the toss … and the match!

And then there was the ‘Groundhog Day’ situation where for 13 straight matches whoever won the toss won the match until Quetta Gladiators’ skipper Sarfraz Ahmed decided to test his spinners and, voila, broke the jinx. It wasn’t as if the teams batting first weren’t trying to win. It was just that the ones chasing were in a more ferocious mood than the defenders. It seemed like a scene from Bill Murray’s classic movie where his character was stuck in a time loop until he realised that whatever he was doing wasn’t the right thing. Just like Sarfraz Ahmed, who wasted his spinners in earlier matches but when he realised his mistake, the curse was lifted!

You can’t end something that covers Hollywood references without the fastest and the most furious franchise! The late order hitting from both the team setting a target and the one achieving it was the highlight of Phase 1 of PSL 6 and made bowlers cautious of new shots that were discovered impulsively by the batsmen. Most of the damage was done by all-rounders who came later in the innings to boost the scoring, and they went ‘Turbo Boost’ without caring whether the bowler was Mohammad Hasnain or Dale Steyn. In some of the cases, the bowler did have the last laugh but till then, the damage was either inflicted or it was too late to make a comeback!