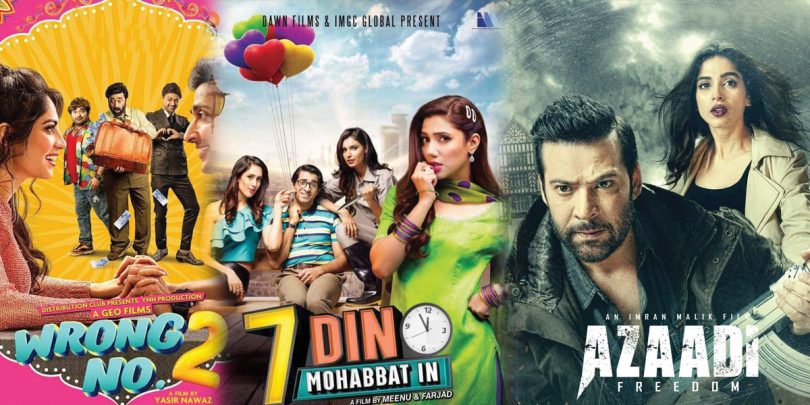 Eid ul Fitr has always been a tricky occasion when it comes to Pakistani films for most of the films in the highest-grossing released in Eid ul Azha.

Eid ul Fitr has always been a tricky occasion when it comes to Pakistani films for most of the films in the highest-grossing released in Eid ul Azha.

Even then, ever since the release of Na Maloom Afraad in 2014, filmmakers have shortlisted Eid ul Fitr as one of the two occasions on which they will release a film. In 2015, Sultanat was the lone Pakistani film in the cinema while Salman Khan’s Kick, Hollywood’s sci-fi Dawn of the Planet of the Apes and Marvel’s Guardian of the Galaxy also made it to the cinemas.

The fifth entry in the Step Up series – Step Up All in (3D) and Planes: Fires and Rescue (3D) came up with the 3D effects, enticing people to visit cinemas. However, the other year proved to be even better as two Pakistani, one Hollywood and one Bollywood film graced the screens and they all did well.

Salman Khan was back at his best in Sultan a year later where his film smashed all box office records in Pakistan and abroad. In fact, it was impossible to get a ticket for Sultan during the Eid Holidays, such was the film’s demand. Pakistani film Dobara Phir Se tried to compete with Sultan but neither it, nor Ice Age: Collision Course and Tarzan were able to dent the box office.

Action flick Yalghaar and romantic comedy Mehrunisa V Lub U competed for the top slot with Transformers: The Last Knight on Eid 2017, but with Pakistan winning the Champions Trophy in Ramadan, the cinemas were the last thing on the cricket fanatic Pakistan’s mind.

Yes, Despicable Me 3 and Johnny Depp’s last film as Jack Sparrow – Pirates Of The Caribbean: Dead Men Tell No Tales – also screened during the Eid holidays but weren’t able to make an effect at the box office.

The most ill-planned Eid ul Fitr in recent years took place in 2018, when as many as four mediocre films – Azaadi, 7 Din Mohabbat In, Wajood and Na Band Na Baraati – were screened together at the cinemas, and none of them came out as the winner. While Azaadi might have recovered its money due to smart cinema placement, the rest gone within a week, with Na Band Na Baraati denting the careers of all those who were part of the film.

Wrong No. 2 and Chhalawa kept the flag of Pakistani films rolling in 2019 and despite not being up to the mark, they were a success at the box office, proving that the fewer the films, the better the result. There were no Eid releases in 2020 and 2021 due to Covid, but since good things come to those who wait, our wait is nearly over.